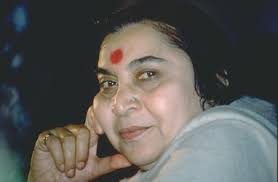 Shri Mataji Nirmala Devi was born on March 21st, 1923 in India to a Christian family of noble descent. As an adolescent, she was the youth leader of Gandhi’s movement for India’s liberation, and her family played a key role in the struggle for the country’s independence. Shri Mataji’s father, a renowned scholar and master of 14 languages, was a prominent member of India’s Constituent Assembly and one of the authors of free India’s first Constitution. Her mother was the first woman in India to receive an Honors Degree in Mathematics.

As a child, Shri Mataji lived with her parents in the ashram of Mahatma Gandhi. Even at a young age, her deep understanding was evident to Gandhi, who frequently sought her advice on spiritual matters. Lal Bahadur Shastri, India’s Prime Minister after Jawaharlal Nehru, had tremendous respect for her and often sought her guidance on economical and political matters.

In 1947, subsequent to her studies at the Christian Medical College in Ludhiana and the Balakram Medical College in Lahore, Shri Mataji married Sir C.P. Srivastava who was to become one of India’s living legends, knighted by the Queen of England, Joint Secretary to India’s Prime Minister, and who served for 16 years as Secretary General of the United Nations International Maritime Organization.

In 1970, Shri Mataji founded a unique method for achieving inner peace, balance and personal growth called Sahaja Yoga, whose message and practice spread to over 100 countries. Hundreds of thousands have benefited from her insightful teachings and techniques, which emphasize the integrated nature of all aspects of the human being, including the relationships between physical, mental, emotional and spiritual health, and create collective consciousness like a drop that becomes an ocean. To this day, Shri Mataji tours the world to share her discovery in a most compassionate way, never accepting payment of any kind. In the United States, thousands come to her free lectures every year, while in countries like India and Russia, her programs which are held in huge stadiums or public parks draw crowds of up to 100,000 people.

For her universal vision of a unified humanity and her extraordinary global work, Shri Mataji has been nominated twice for the Nobel Peace Prize. In 1986, Shri Mataji was declared “Personality of the Year” by the Italian government. In 1989, following her meeting with the head of the Russian Ministry of Health, Sahaja Yoga was granted full government sponsorship, including funding for scientific research. In 1994, the Mayor of Brasilia welcomed Shri Mataji at the airport, presented her with the key to the city and sponsored all of her programs. In 1995, she received a PhD degree in Cognitive Sciences by the University of Bucharest, Romania. During the same year she was an official guest speaker at the Women’s International Conference in Beijing and official guest of the Chinese government invited to speak to the people of China.

In 1997, a tribute was paid to Shri Mataji by Claes Nobel (Chairman of United Earth and grandnephew of Alfred Nobel, creator of the Nobel Foundation) at the Royal Albert Hall in London. Shri Mataji has spent over 16 years in England, where her teachings have spread and become established across a wide range of cultures, races and social levels. Her public appearances at the Royal Albert Hall, London, have become an annual event since 1993. She currently resides in northern Italy which has become the home of monthly International Sahaja Yoga seminars attended by thousands since 1991.

In the United States, Shri Mataji has been invited to the United Nations on four occasions, between 1989 and 1994, to speak on ways to achieve world peace. During the 105th Congress in 1997, Congressman Eliot Engle read an honorarium for the Congressional Record commending Shri Mataji for her dedicated and tireless work for the emancipation of humanity.

In order to express their gratitude for her selfless humanitarian work, the mayors of several major cities in America have proclaimed special days as “Shri Mataji Nirmala Devi Day” in her honor: Cincinnati, OH (September 10th, 1992), Philadelphia, PA (October 15th, 1993), Yonkers, NY (September 26th, 1994). The city of Berkeley, CA has proclaimed a Shri Mataji Nirmala Devi Day on June 18th. This day is also known as Juneteenth Day and is celebrated by the African Americans as the day on which they received the news that Abraham Lincoln had freed the slaves.

In addition to founding Sahaja Yoga meditation, Shri Mataji has distinguished herself as a great humanitarian by creating a number of non-governmental organizations, including:

The National Institutes of Health in Washington D.C. have been hosting weekly Sahaja Yoga programs offered to patients and staff since 1998, and have hosted two international symposiums on Sahaja Yoga and Health. Hundreds of doctors in England, Australia, Russia and India are studying the medical benefits of Sahaja Yoga and cases where its practice alleviated the symptoms of incurable diseases such as cancer, epilepsy, high blood pressure, asthma, and others. In Australia and India there are health centers which use exclusively the methods of Sahaja Yoga for curing their patients of incurable diseases.

Shri Mataji has also created an international theater company – the Theater of Eternal Values – whose international cast and crew has successfully toured throughout Europe, Australia, Israel, India and the United States. Its mission is to produce performances that promote the universal values of a global culture, transcending all boundaries of race, religion and social distinctions. Last year, the Theater of Eternal Values presented Mozart’s Magic Flute opera during several performances in New York City and upstate New York.

In the United States alone, weekly programs have been offered free of charge in many institutions such as:

Recently, Shri Mataji has written a book called Meta Modern Era, which offers deep insights and solutions for the crises of modern times.